With the strength of being a purely agricultural district, Vi Thuy is implementing many solutions to improve the quality of agricultural products, maximizing the efficiency of various types of cooperative economies in the area. 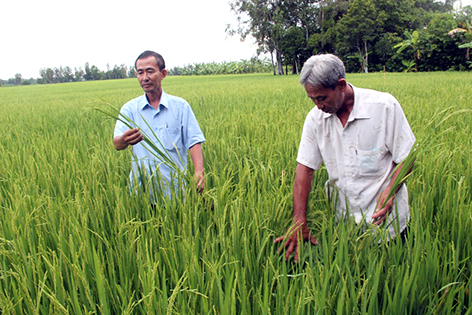 In addition to focusing on directing and developing strengths in rice and fruit trees, Vi Thuy district is implementing a program of one product per commune. In order to build brands and increase the value of agricultural products, the district has supported Tan Long Cooperative to complete the registration documents for Vi Thuy clean rice products according to OCOP standards. At the same time, the council meeting to evaluate and classify Vi Thuy clean rice of Tan Long Cooperative, Vinh Tuong commune, the result was recognized as 4 stars. The district is choosing some more potential products to build according to OCOP standards, contributing to improving the quality of agricultural products as well as maximizing the efficiency of the cooperative economy in the area.

Mr. Truong Van Tri, Head of Agriculture and Rural Development Department of Vi Thuy district, said: The district's agricultural sector has promoted the application of science and technology in production, associated with trademarks. In 2019 and 2020, implement crop transformation in the right direction. In seafood, the locality focuses on developing eels and currently has about 4,000m2 of stocking, with an output of 28 tons/year, concentrated in Vi Thuy, Vinh Thuan Tay and Vi Thang communes. In addition, there are 13 households raising eels with an area of ​​about 9,000m2.

Mr. Tran Chi Hung, Director of the Provincial Department of Agriculture and Rural Development, said: Vi Thuy district has 2 craft villages recognized as growing betel nut and dan dat. In addition, only 1 clean rice product has been recognized as a 4-star standard. The district also has many products that meet clean standards such as clean rice and VietGAP watermelon. In general, Vi Thuy has an interest in the VnSAT project during the implementation process; cooperatives in the area operate effectively, applying scientific and technical advances from input to output. However, for the growth indicators of region I, the district needs to focus on three areas that are still low, namely the area of ​​vegetables, the total herd of cattle, and the area of ​​fishery.

In addition to focusing on building a sustainable agriculture, other areas of work are focused on directing and operating by the District Party Committee and the District People's Committee. For 17 targets set by the district Party Committee, so far, 5 targets have been achieved, 6 targets are 70-97%, and 6 targets are considered at the end of the year. In the third quarter, a number of targets and tasks were performed behind schedule, especially those related to local economic development. The propaganda to mobilize people to install Bluezone application is low, the health insurance coverage rate is still slow and low compared to the plan. The crime situation is still complicated, social evils have increased over the same period; The work of calling and attracting investment in the area is still limited and has not been able to take advantage of external resources.

Some targets were implemented relatively well such as total budget revenue reaching 84.23% of the resolution target, of which domestic revenue reached 74.53%, up 11.63% over the same period. The disbursement of investment capital under the Convention until September 30 has reached 90% of the plan. Promote advantages, effectively deploy large fields; smart rice production project. Strictly implementing the state management of construction, there have been no cases of unauthorized and illegal construction in the past 9 months. The drastic involvement of the whole political system, departments, branches and localities in disease prevention and control, especially the Covid-19 epidemic. The district has implemented timely, serious, strict and synchronous measures, especially the review and isolation stage for foreigners, overseas Vietnamese, and the number of people returning from epidemic areas. Policies on social security, social welfare, and vocational training are concerned, directed, and implemented in a timely and effective manner. Secretary of the District Party Committee, Chairman of the District People's Committee Vi Thuy Nguyen Van Vui affirmed that the district is determined and will fulfill 100% of the targets of the 2020 resolution. Defining agriculture as an advantage, the district is focusing on developing this field, especially rice brand, build more OCOP products.

In a recent meeting with Vi Thuy district, the Provincial Party Committee and Provincial People's Committee proposed that Vi Thuy District Party Committee focus on leading and directing to review the implementation of the targets and strive to soon complete the targets of the 2020 resolution. Accelerate the implementation and disbursement of the public investment capital plan. Be more drastic in attracting investment, support to solve difficulties and problems for investors in the area, note that the support and guidance for investors to implement projects must ensure a firm grasp of the situation. , understand the regulations to avoid wasting investors' resources. Focusing on supporting the implementation of important projects in the area such as Vi Thanh bus station and the project of Hau Giang province's driving test center, the agricultural farm project combined with roof voltage, striving to start construction in the future. 2020. Pay attention to developing existing markets and trade centers associated with urban centers along important traffic routes.

Mr. Le Tien Chau, Secretary of the Provincial Party Committee, Chairman of the Provincial People's Committee, requested the District Party Committee and Vi Thuy District People's Committee to be more proactive and creative in exploiting the potential and advantages of the district adjacent to Vi Thanh city, with Important traffic routes pass through to develop the local economy, especially in the fields of agriculture, commerce, services, and tourism. Pay more attention to developing and replicating effective agricultural models such as agricultural farm projects, combining solar power; eel farming; tortoise; crab nail; smart rice production... By the end of 2020, at least 2 effective agricultural models must be developed. Effectively implement projects in the field of agriculture; implementing projects to improve the quality of cooperatives; select from 3-5 potential cooperatives to focus on investment, development support and then replication. Strive to have 3 products recognized as OCOP each year, in which priority is given to investment in rice products. The Standing Board of Vi Thuy District Party Committee directs to prioritize resources for product development, branding and commercialization of rice products, which are products of the district with longstanding strengths and brands. Interested in tourism development, creating new tourism products; exploiting existing tourist attractions in the area such as Vietnam - Australia tourist area, Truc Lam Zen Monastery, Vi Thuy betel nut village... Especially paying attention to directing the construction of a tourism development project associated with traditional craft villages. locality.